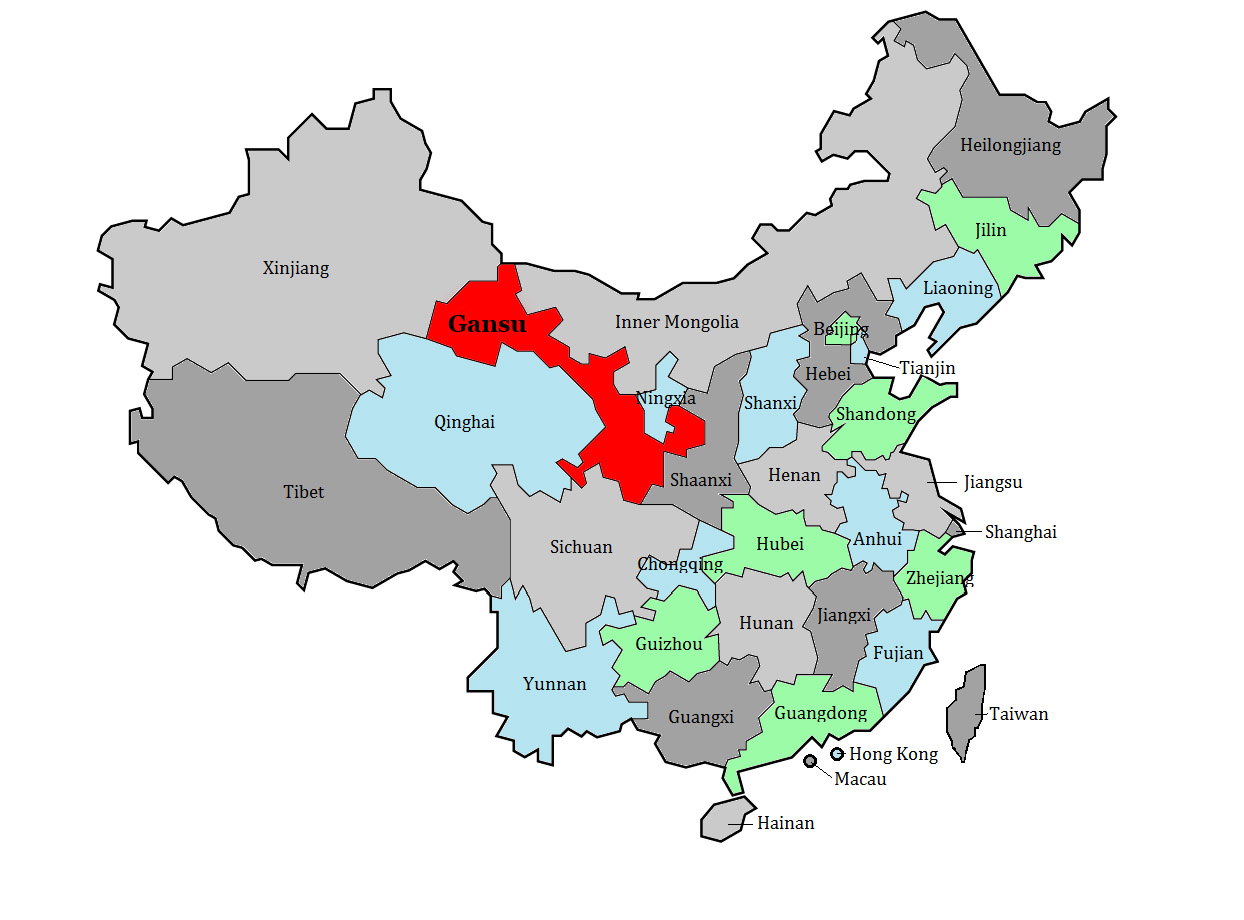 Located in the north-west of China, between the Tibetan and Huangtu plateaus, Gansu connects the Chinese heartland with the vast desert region to the northwest. Covering a total area of around 450,000 km2, roughly the size of Sweden, Gansu borders 6 different Chinese provinces or autonomous regions: Inner Mongolia, Ningxia, Xinjiang, Qinghai, Sichuan, and Shaanxi, as well as having a border with Mongolia.

Archaeological findings have shown that Gansu has been inhabited since at least 6000 BCE. Later, China’s founding Qin Dynasty had its roots in the area. As the Chinese empire expanded during the Han Dynasty, so too followed China’s Great Wall and, much later, the province’s first railway through Gansu’s Hexi Corridor. The Hexi Corridor is an east-west route which runs through the heart of the province, and connects China to Central Asia and the West. The Hexi Corridor eventually became a key leg of the Silk Road, an important trade route that made Gansu important not only as a center of economic trade, but as a place of cultural and religious exchange. As the silk trade grew, so did the trading posts along the Hexi corridor. Many of these ancient posts form the major population centers of Gansu today. The blending of cultures in Gansu eventually led to ethnic tensions such as the 1862-1877 Muslim rebellions left millions dead. Gansu is highly seismically active. A 1920 8.5 magnitude earthquake, for instance, killed over 200,000 people. 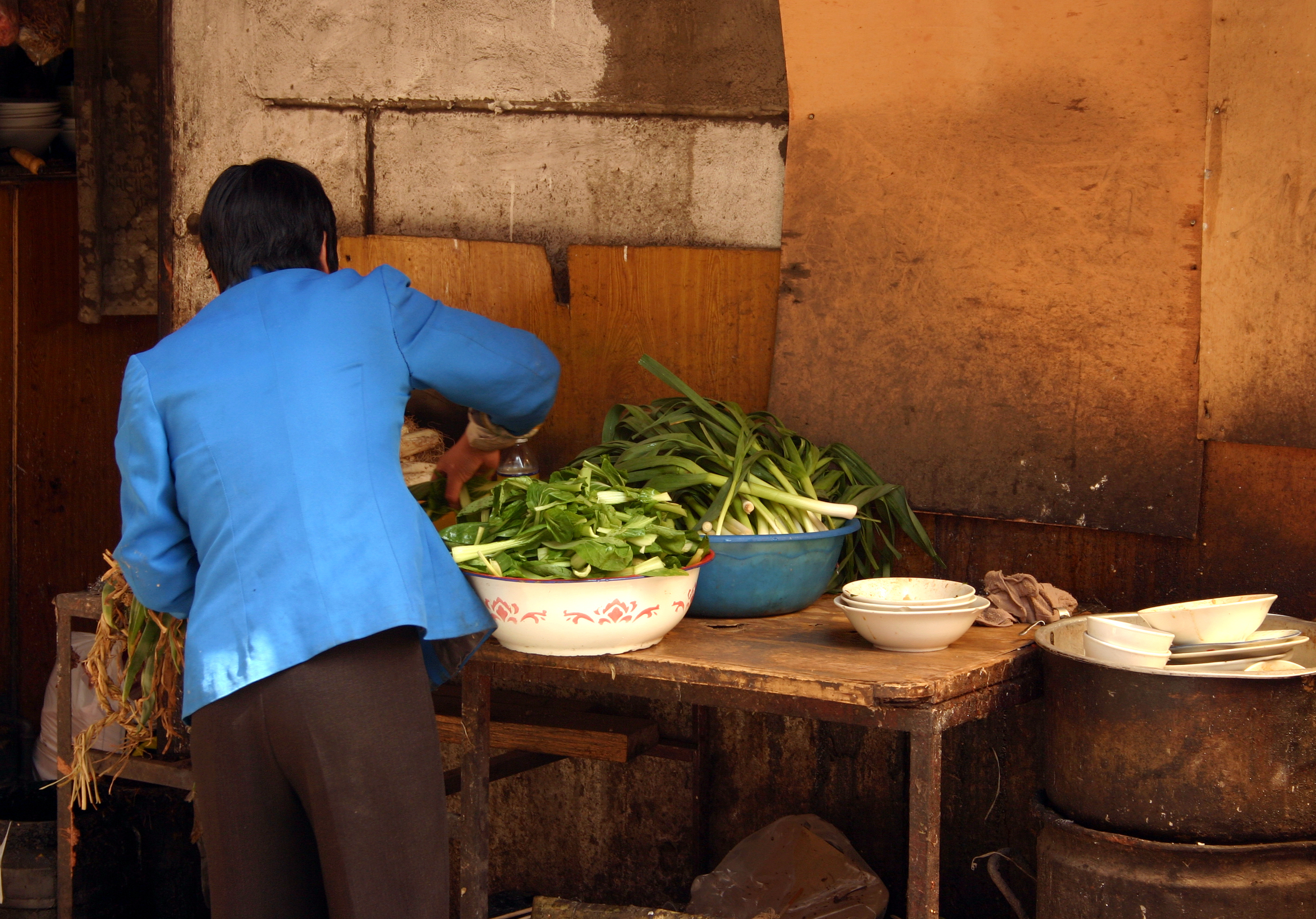 In 2018, Gansu has a population of roughly 26 million people. Its population accounts for approximately 2% of China’s total, and it is the 22nd most populous province out of China’s 33 provinces, municipalities, and autonomous regions. Almost 92% of the population is Han Chinese with the rest being made up of Hui, Tibetan, Dongxiang, Tu, Manchu, Uyghur, Yugur, Bonan, Mongolian, Salar, and Kazakh minorities. This rich mix of people means that the province abounds with mosques, monasteries and temples. 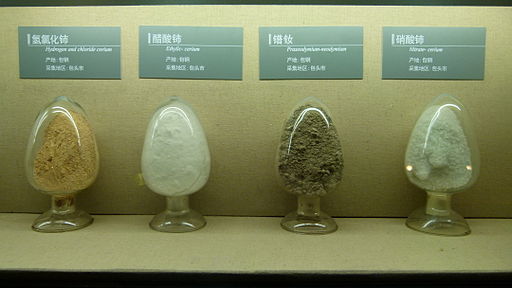 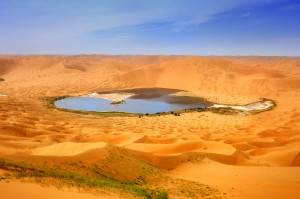 Gansu’s secondary industries accounted for approximately 34% of GDP in 2017. Modern industrial development in Gansu did not begin until after the railroad through the Hexi Corridor was completed in the mid-1950s. It was Mao Zedong‘s idea to transform the province into a center of heavy industry with Lanzhou, the capital, at its heart.  Mao believed that by dispersing China’s manufacturing bases in western China, China would better be able to defend them in the case of enemy attack. Gansu today engages in mining, electricity generation, nuclear power, petrochemical extraction and refining, metallurgy, oil exploration machinery, building material production, locomotive equipment, chemical fertilizers, petrochemicals, hydropower and other renewable energy manufacturing including solar and wind. Gansu is one of the most important solar energy bases in China and ranks fifth in terms of wind energy generation. Gansu also has some forest reserves. To take advantage of its animal husbandry and agricultural sectors, the province is also investing in leather and food processing.

In 2017, Gansu’s foreign direct investment was approximately $43 million down from $135 million in 2010. Hong Kong the largest investor in the province followed by Germany, the US and France. 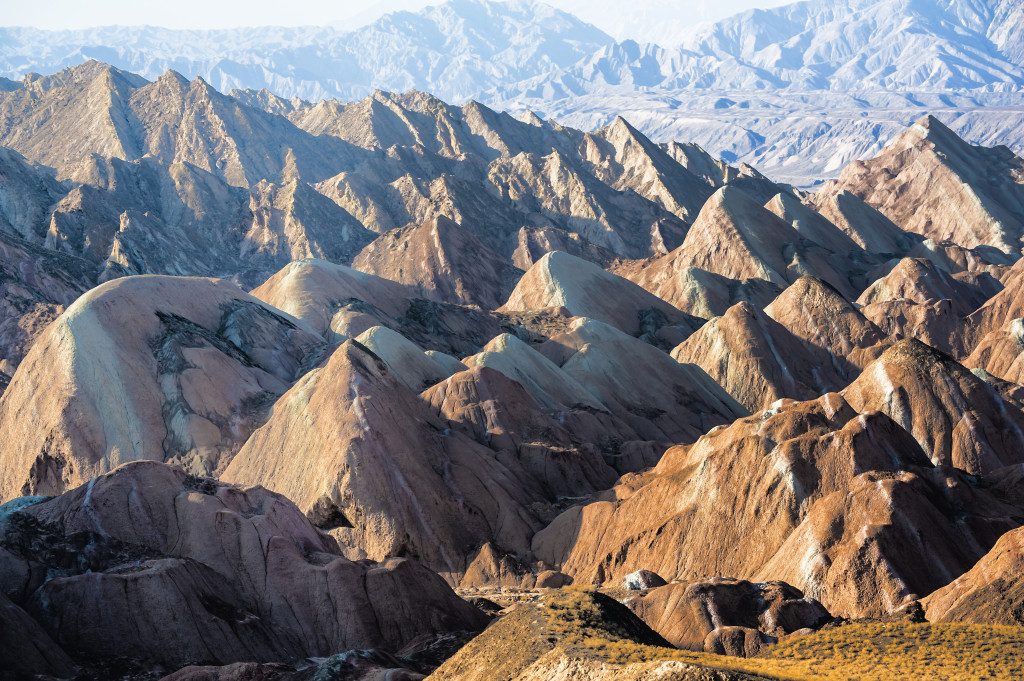 Gansu is in China’s north western region. The province contains the geographical center of China. It resides on the upper reaches of the Yellow River in China’s western inland area, between the Tibetan Plateau, Inner Mongolia Autonomous Region and the Loess Plateau.  Because Gansu is located at the intersection of three Highlands: the Qinghai-Tibet Plateau, the Inner Mongolia plateau and the Huangtu or Loess Plateau, it is an elevated area, with an average elevation of over 1000m above sea level. Part of the Qinlin Mountain range extends through the province’s south, making the southern region very rugged while the north is flat. The Yellow River not only flows through the south of Gansu, but it gets much water from sources within the province. The river has allowed Gansu to be settled since pre-historic times. Away from the Yellow River and its various oases that dot the Hexi Corridor, Gansu is an arid, barren land with warm to hot summers, and very cold winters. In some areas, Gansu becomes subarctic, with temperatures dropping to -40 degrees Celsius during the winter.

Desertification is a serious issue throughout the province. Gansu sees little rain and can be plagued by dust storms in the spring. China is currently working in conjunction with the Asian Development Bank on what has been called the Silk Road Ecosystem Restoration Project whose aim is to reverse desertification in the province.

Earthquakes are another challenge for the area. Gansu experiences tectonic activity caused by the movements along the Eurasian and Indian Plates. The eastern part of Gansu has been hit by major earthquakes which have taken place on average every 65 years since the 6th century, while minor earthquakes shake the province approximately once every 10 years. 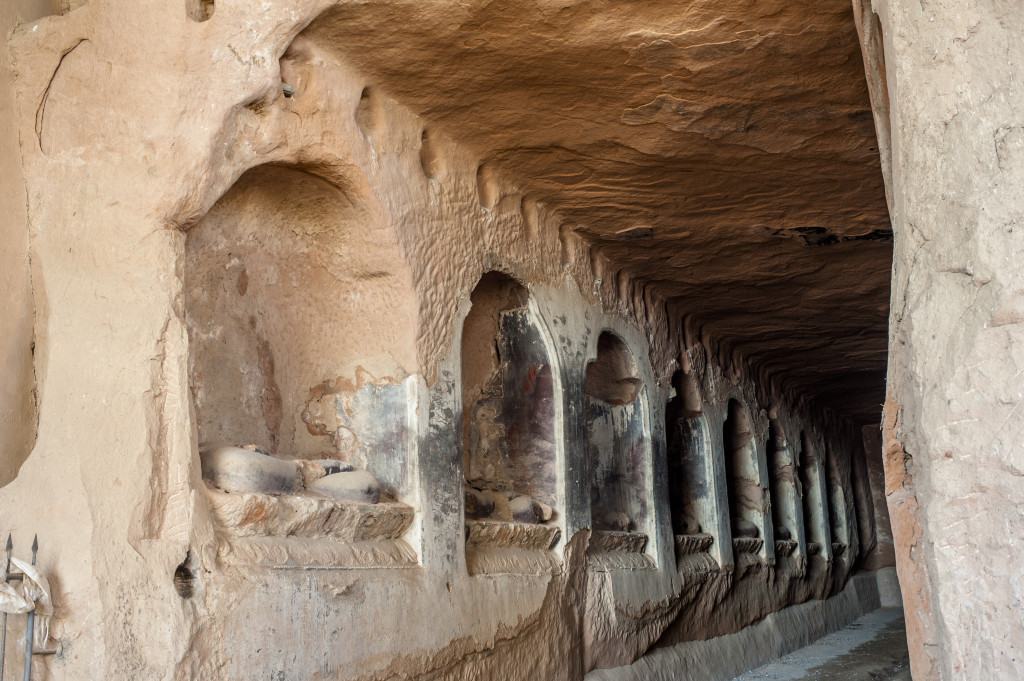 Lanzhou, the province’s capital, is located at the cartographic heart of China and hosts the Gansu Provincial Museum. However, Dunhuang, a small oasis town that prospered during the Silk Road, is the main reason that most people visit Gansu. Surrounding it are forts, towers and cave temples as well as magnificent sand dunes. The Dunhuang cave paintings are some of the best Buddhist paintings in China. A half hour drive from Dunhuang are the Mogao caves which also hold some of the best Buddhist paintings in China, if not in the world, and are a UNESCO World Heritage site.

Buddhism arrived in China over the Silk Road, and the sculptures at Bingling Si were one of the first Buddhist monuments to be created in China. Known as the Thousand Buddha Caves, they were carved over a period of 1,600 years by sculptors hanging from ropes. They were funded by wealthy Silk Road traders heading west.  Isolated by the waters of the Yellow River – which saved them from destruction during the Cultural Revolution –reaching them requires boat travel. 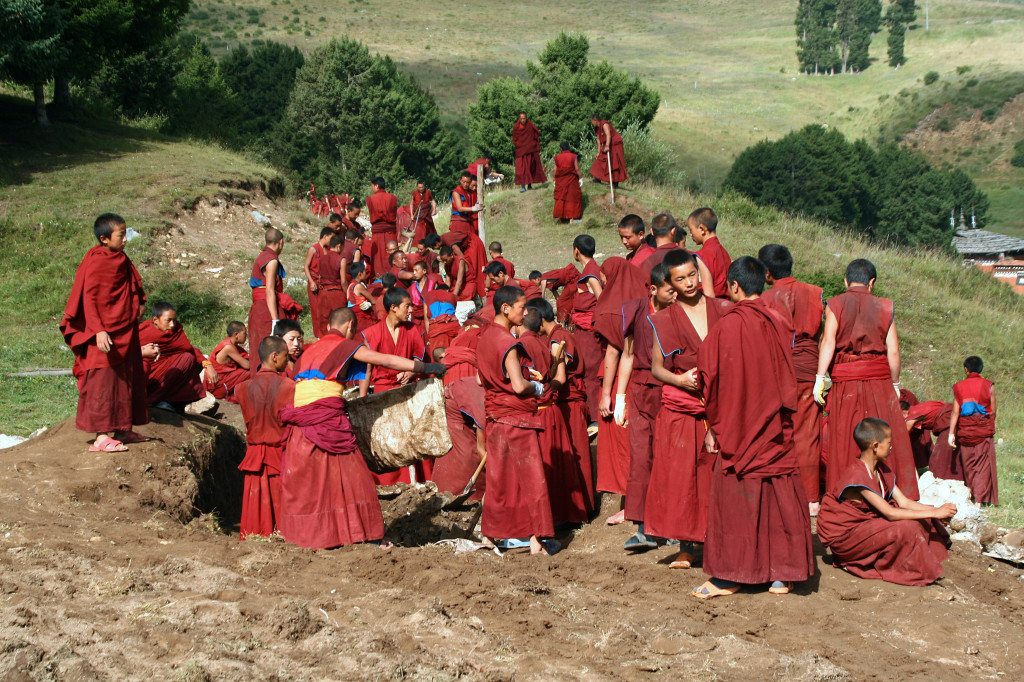 Langmusi is a remote mountain town set in beautiful country. It boasts beautiful walking trails that are dotted with several Buddhist temples.