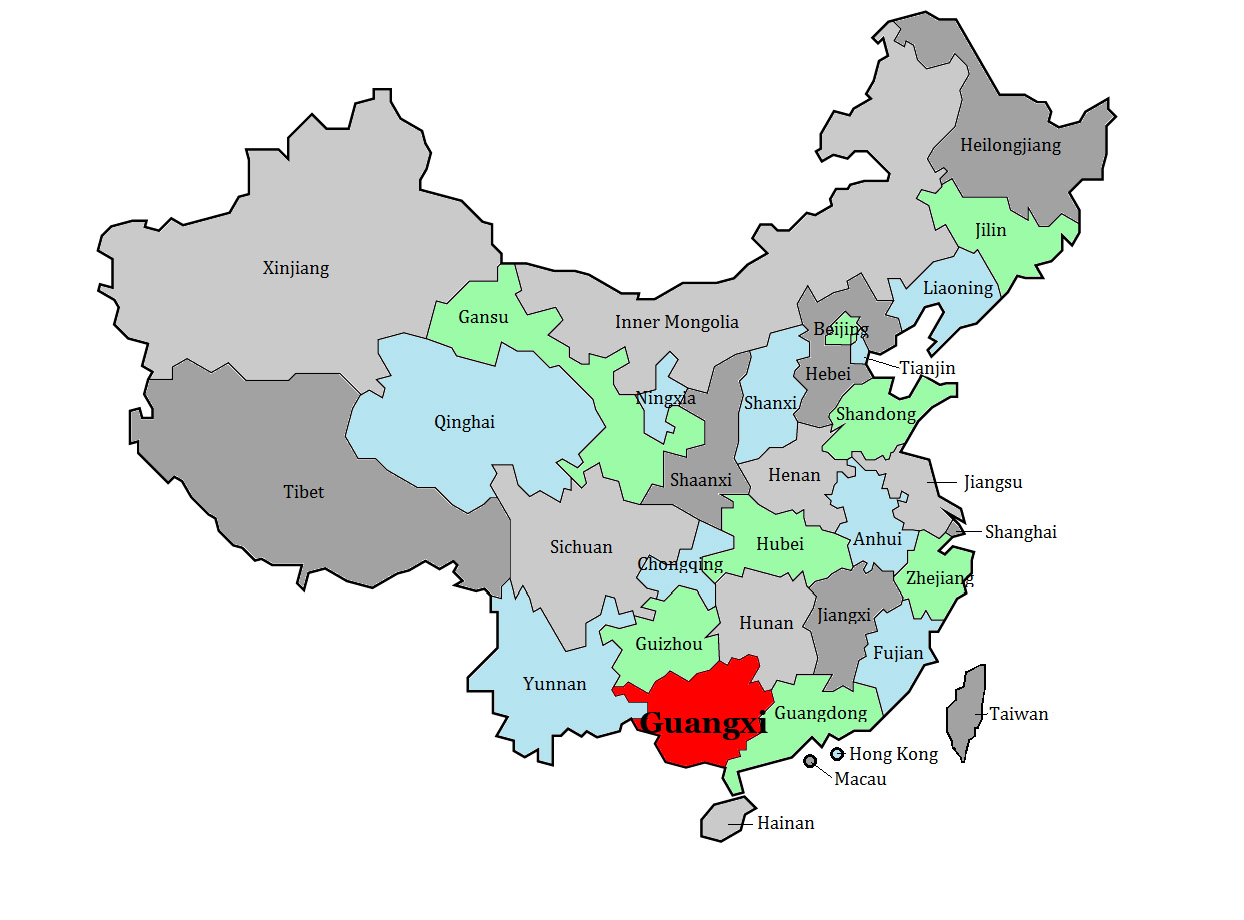 Guangxi Zhuang Autonomous Region can be found in southern China. Slightly smaller than Laos, Guangxi has an area 220,400 km2. It is bordered by Yunnan to the west, Guizhou to the north, Hunan to the northeast, and Guangdong to the east, the Gulf of Tonkin and Vietnam to the south and southwest. Guangxi was named by the Song Dynasty (960–1279) when the region was known as ‘Wide South, Western Route’, meaning the western half of land south of the Nan Mountains. The Yuan Dynasty (1206–1368) shortened its name to Guangxi – ‘Western Expanse’— in contrast to Guangdong -‘Eastern Expanse’ – when it made provinces out of these areas. In 1958, the province became the Guangxi Zhuang Autonomous Region. It is one of five provincial-level autonomous regions, each of which is designated to provide some autonomy for a significant indigenous ethnic group. Thus, the governor of Guangxi must always be Zhuang, though the reality of China’s political system means that this autonomy is in name only. 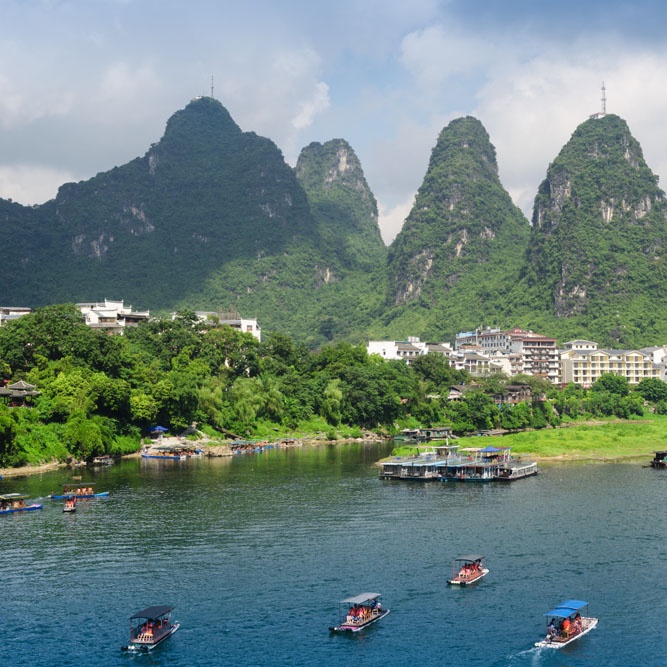 Before the Han people arrived around 221 BCE, Guangxi was controlled by tribal peoples, the largest of which was the Zhuang who represent modern-day China’s largest minority. By 214 bce, during the Qin Dynasty, the Han began expanding their reach into the eastern and southern parts of Guangxi; during their reign, they organized the digging of the Ling Canal connecting the Xiang and Gui rivers to form a north-south waterway. At the end of the Qin Dynasty, the Zhuang formed an independent state but was again absorbed into the Chinese empire during the Han Dynasty (206 bce–220 ce). This pattern of strengthening and waning Han control over Guangxi characterized much of its history. As late as the Ming and Qing Dynasties unrest frequently plagued the province as tribal peoples battled for greater autonomy from Han control. The Ming Dynasty (1368-1644) engaged in a policy of military colonization and tried to secure hegemony in the area by getting local tribal groups to battle against one another. At the 1465 Battle of Big Rattan Gorge between the Zhuang and the Yao peoples, for instance, an estimated 20,000 people died. The Qing Dynasty (1644-1911) followed a hands-off approach until its imposition of direct rule in 1726. By the 19th century, strife in the area was frequent. An 1831 Yao people revolt, for example, was followed by the infamous 1850 Taiping Rebellion.

In the early 20th century, Guangxi leaders supported the establishment of a Republic, and the region became a base of the Nationalist revolution led by Sun Yat-sen. The 1911 Wuchang Uprising led Guangxi to secede from the Qing Empire. Following the 1911 Revolution, Guangxi’s leaders were active in the reorganization of the Chinese Nationalist Party. After the rise of Chiang Kai-shek to power in 1927, the Guangxi leaders formed the Guangxi Clique in opposition to Chiang. Although Chiang defeated their revolt in 1929, Guangxi retained a semi-independent status. During this time, many Zhuang leaders developed sympathy for the emerging Communist movement.

During the second Sino-Japanese War, Japan invaded southern Guangxi in 1939. The Japanese made a large push to take the rest of the province in 1944, but they were unable to maintain their position. In November 1949, Guangxi became a province of the People’s Republic. 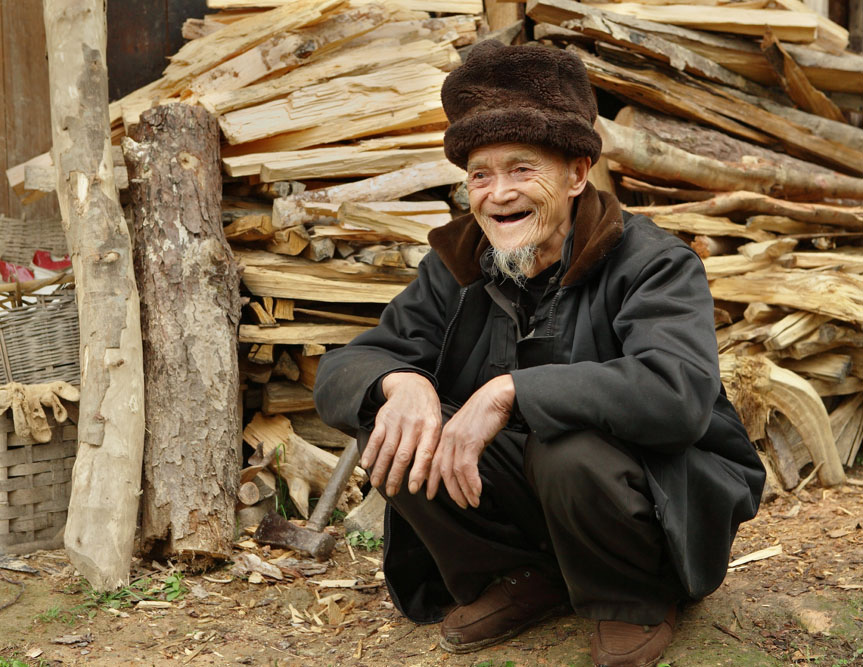 As of 2018, Guangxi had a population of approximately 49 million people, accounting for approximately 4% of China’s total and making it China’s 11th most populous region. About 14 million of Guangxi residents are Zhuang, the second largest ethnic group in China after the Han. The Zhuang have lived in Guangxi for over 2,500 years, cultivating rice and other agricultural products. They have been called ‘water dwellers’ because historically they made their lives close to water, and frequently built their homes on stilts. Over 90% of the Zhuang in China reside in Guangxi. Han, Dong, Miao, Yao, Hui, Yi, Shui and Gin people also live in the province. The Zhuang predominantly live in the western two-thirds of the region, while the Han make their home in the eastern third, though the big cities are an eclectic mix of ethnicities. The Dong tend to reside in the high mountains close to the Guangxi’s northern border. The rest of Guangxi’s minorities are scattered throughout the province. Most Guangxi residents live in rural areas, with two-thirds concentrating in the east. Despite the large presence of ethnic minorities, there is very little ethnic tension within Guangxi, and the Zhuang are well integrated into Chinese society. Guangxi’s major cities include its capital Nanning, the major industrial city of Liuzhou and Guilin, one of China’s premier tourist cities. 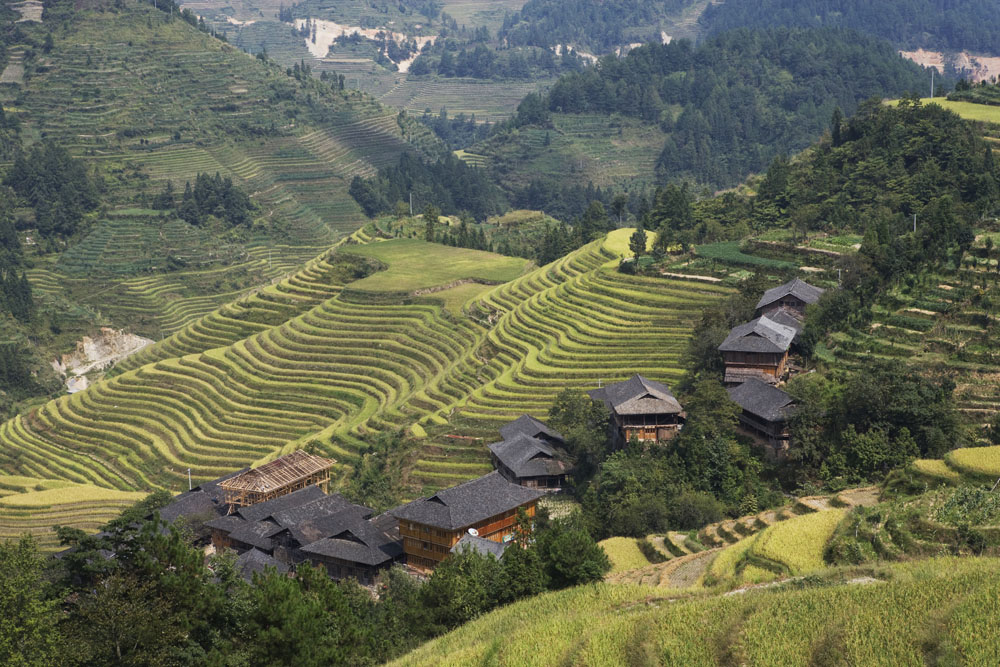 In terms of agriculture, Guangxi is a leading producer of subtropical fruits including bananas, pineapples, oranges and shaddock. Is also producer of sugarcane and vegetables. Fishing is also an important economic activity, especially in the Gulf of Tonkin which is home to one of the world’s richest fishing grounds. Catches include croaker, red snapper, grouper, butter fish, red coat, herring, squid, prawns, eels, perch, mackerel, sharks, and sturgeon. Fish aquaculture and silkworm production are synergistic in Guangxi as its farmers feed discarded silkworm cocoons to their fish and fertilize their mulberry trees with fishpond mud. Guangxi is also known for its pearl farming.

Guangxi has 97 proven mineral resources, many of significant size. For instance, the province is home to about a third of China’s tin and manganese deposits. It also has large stores of antimony and lime. In 2007, China found an additional 120 million tons of new, very high-quality bauxite reserves in southern Guangxi, giving it proven bauxite reserves of about 1 billion tons which makes Guangxi one of China’s largest bauxite sources. Guangxi also has smaller deposits of coal, iron, tungsten, vanadium, antimony, silver, aluminum, talcum, manganese, bismuth, zinc, hafnium, and lead. 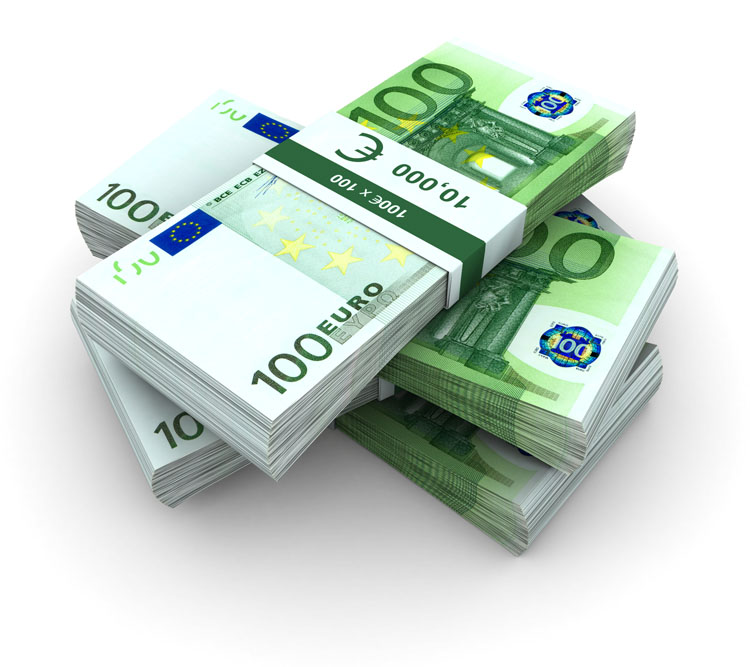 Guangxi has tremendous hydroelectric potential, and the province is increasingly becoming a large producer of hydro-electrical power. Guangxi also creates power at its thermal plants and widely uses biogas generated from human and animal waste for domestic consumption.

For its services industry, the wholesale and retail trade sector, the hotel and catering services sector, the transportation sector and the storage and postal services industry accounted for a significant percentage of total tertiary GDP.  Additionally, because of its distinctive and famous karst scenery, especially around Guilin, tourism is a significant source of income for the region. Guilin is now one of China’s most popular tourist destinations. Guangxi has benefitted from China’s links with ASEAN. Nanning has hosted the annual ASEAN Expo since 2004, which has encouraged investment and infrastructure improvements in the city.

In 2017, Guangxi received $823 million important direct investment, the majority of which came from Hong Kong, followed by the British Virgin Islands, Singapore, Japan and the US. Industry received most of the foreign investment in 2017, followed by real estate, public services, agriculture and logistics. 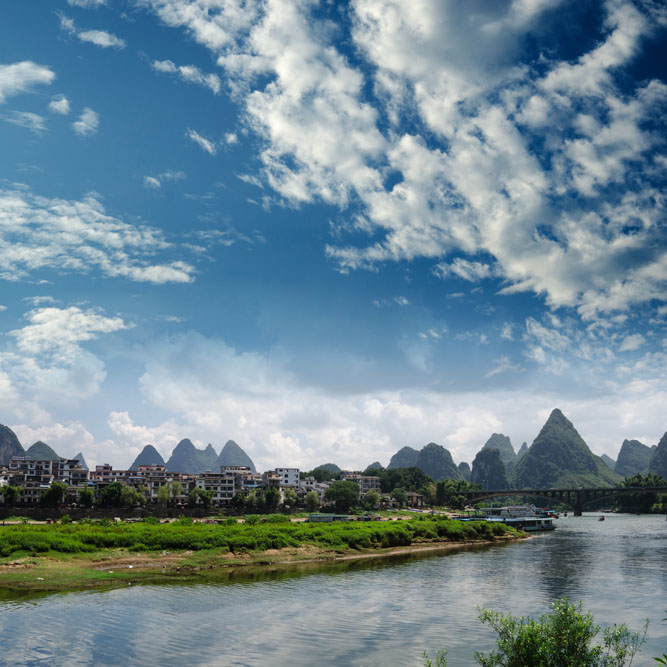 Guangxi is a mountainous province. The Nanling Mountains run along the provinces northeast border, with the Yuechang and Haiyang Mountains splitting off from the main Nanling Mountain branch. The Duyao and the Fenghuang Mountains are also found in the north. In the center of the province are the Dayao and Daming Mountains, while along the province’s southeastern border are the Yunkai Mountains. The Yunnan-Guizhou Plateau stretches into the Western part of the province. Many rivers pour through the valleys of Guangxi’s mountains, most of which are tributaries of the Xi or West River. The Hongshui, Liu, Qian, You, Zuo, Yu, Xun, and Gui all flow north to south until they merge with the Xi River which runs across the width of Guangxi before emptying into the South China Sea near Guangzhou in Guangdong province. Guangxi’s Qin and Nanliu rivers flow into the Gulf of Tonkin. The Xiang River flows northeastward into Hunan province.

Many of these rivers have worn through Guangxi’s limestone soil forming spectacular karst landscape featuring pinnacles, spires, caves, caverns and sinkholes, especially in the area around Guilin. These landscapes—along with similar ones found in neighboring Guizhou and Yunnan—became a UNESCO World Heritage site in 2007.

Guangxi has a short coastline on the Gulf of Tonkin that it acquired from Guangdong in 1965. Its important seaports include Beihai, Qinzhou and Fangchenggang. The famous Detian waterfall near Vietnam marks part of the border between the two countries and is the world’s second largest cross-border waterfall, surpassed only by Niagara.

Guangxi is subtropical, allowing agricultural production throughout the year. Summer stretches from April to October and is characterized by high temperatures and humidity. Winters are generally mild and snowfall incredibly rare. 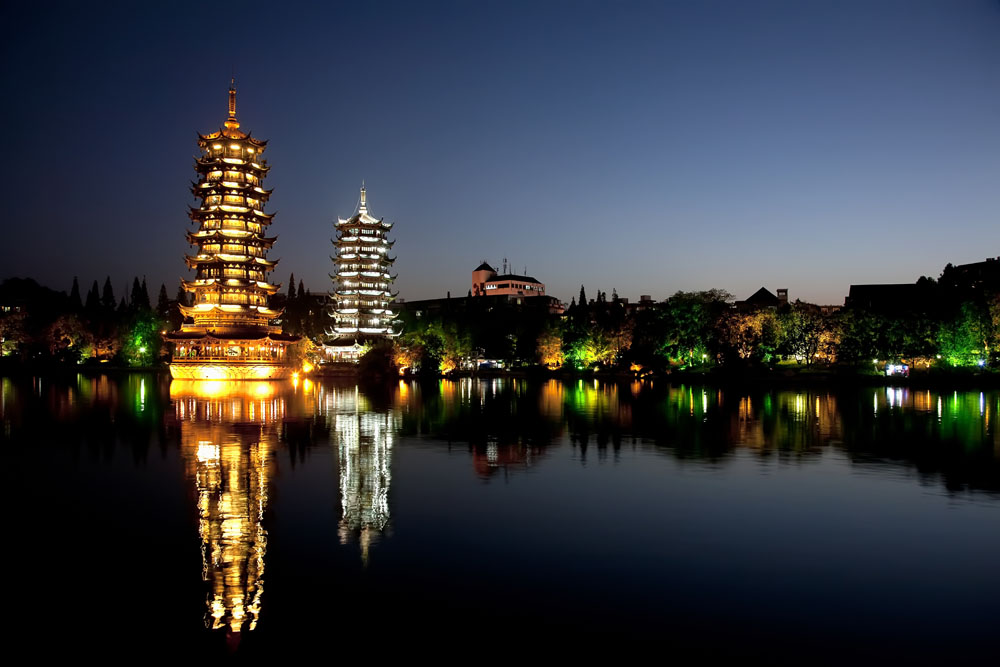 Close to Guilin are the Dragon’s Backbone Rice Terraces, carved into the hills of the area at altitudes reaching 1000m. After the May rains, the paddies pool with water and are picturesque with reflections. Within this rice growing regions lie many quaint villages including the Zhaung populated Ping’ an, the Yao populated Dazhai, and the mixed-resident Tiantouzhai.

Also near Guilin is the 1000 year old village of Jiangtouzhou, characterized by cobble-stoned, narrow alleyways, and wooden-gated, courtyard homes. Its residents are all purported to have the last name of Zhou. Close to Jiangtouzhou is the Jinshan Miao Temple where boats can be rented to enjoy the river. 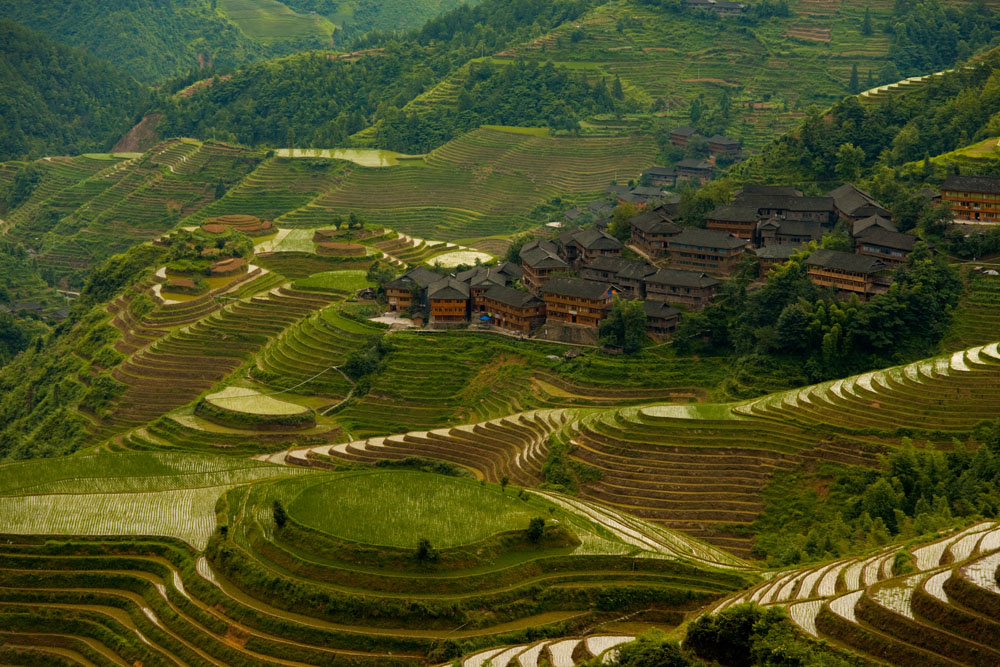 To the south of Guilin is Yangshuo which is located in the heart of Guangxi’s karst scenery providing ample opportunity for cycling through the its many villages, hiking or rock-climbing up its many peaks, or floating down its scenic rivers. It can be reached by a scenic boat cruise from Guilin that takes around three hours. Yangshuo exploded into life in the 1990s, driven by visits from western backpackers but is now a major tourist destination for travelers from all over China and the world. The development of recent years (including the symbolic opening of MacDonalds) has destroyed some of the peace of the town, but it remains a highly popular destination. It is also the permanent home to the Zhang Yimou production of San Liu Jie, which is performed nightly at a purpose-built outdoor arena that utilizes the local river and mountains as spectacular natural scenery. Many weekly markets also run throughout the region. The 1000 year old village of Xingping is home to many historic residences. Close by is ancient Fish Village. Between Xingping and the village of Yangdi is a beautiful 16 km hiking trail. The Qing-dynasty village of Shitoucheng is located at the top of a limestone peak and has much of its old wall and gates still intact. The cobble-stoned village of Fuli is well-known for its fans. Along the Yulong River is the lovely town of Jiuxian. 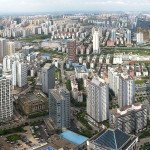 Three hours by bus from Guilin is Huangyao, used as a backdrop for many films including the Painted Veil. The 900 year old village has more than twenty temples as well as pavilions, clan houses and two 500 year old Banyan trees.

South of Nanning is Beihai, located on Guangxi’s coast. It has some good beaches – such as Silver Beach (though the local claim that is the greatest beach on the planet is something of an exaggeration) – and some historic colonial-era architecture. 124km from Beihai is the once volcanic island Weizhou Island now home to several fishing villages and excellent diving opportunities amongst its many coral reefs. There is also the ancient Three Old Women Temple and the 1853 French-built Catholic Church. 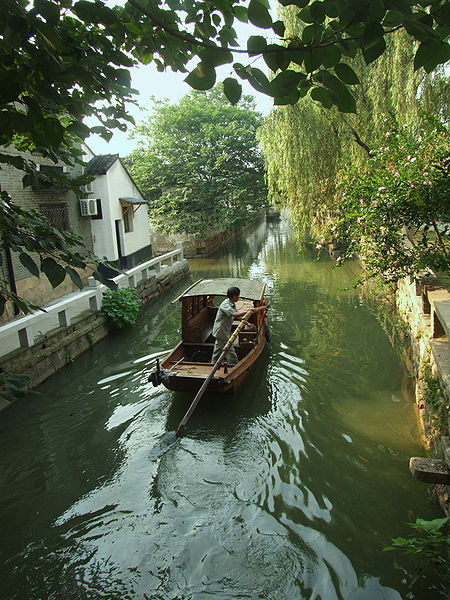 At the very western edge of Guangxi is Leye, a good stopping-off point to see the region’s many natural features. Leye Geopark features many collapsed karst mountains – such as the Chuantong Tiankeng and the Dashiwei Tiankeng – in which now flourish primeval forests. The 970m-long Loumei Lotus Cave was once house an underground river and now features many lotus-shaped limestone formations. Also in the west of the province is Baise, an important historical site of the Youjiang rebellion, one of the first significant communist uprisings against the Nationalists in 1929.